Two Welsh Derbies this week which made for enjoyable viewing, with some excellent individual performances.

Y Ddraig has selected the following players for the team of the week. 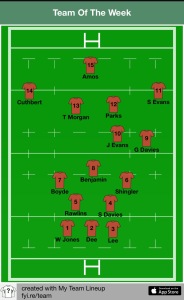 Reasons for the selections are as follows:

Hallam Amos has got the nod this week, made some good breaks and also showed some good defensive work for the Dragons. A mention also for Dan Evans who put in a solid performance in the Ospreys defeat to the Scarlets.

No real star performers this week but have gone for Alex Cuthbert who carried strongly for Cardiff Blues this week and as always was very physical when required at the breakdown.

Some good performances in this position this week. Tom James played very well as did Jeff Hassler, but have gone for the form winger in Wales, Steff Evans who yet again put in a great shift for the Scarlets.

Jonathan Davies played well for the Scarlets but the choice this week is Tyler Morgan who showed everyone what a talent he is. Made an outstanding break for one of the Dragons tries and also made a try-saving tackle when he backtracked catching Josh Navidi when he seemed certain to score.

Hadleigh Parkes star man in this position this week, an excellent footballer who qualifies for Wales at the end of the year, and at this rate will be in the six nations squad.

Gavin Henson played well for the Dragons as did Dan Biggar but the choice this week is Jarrod Evans of the Cardiff Blues. Outstanding in attack always looking a threat. A fine performance from the young 10.

Sarel Pretorius played well for the Dragons, but our choice this week is Gareth Davies, scoring two tries and looked dangerous all night for the Scarlets.

Brok Harris played well for the Dragons, but Wyn Jones was outstanding for the Scarlets, strong ball carries and scrummaged well all night.

Scott Otten had a fine game for the Ospreys but Elliott Dee was yet again outstanding this week. In great form and pushing really hard for a Welsh squad place for the autumn series.

Seb Davies is a must choice this week, was absolutely outstanding. A real star in the making.

Yet again the choice this week is Aaron Shingler. He is in the form of his life and in our view has to be the 6 for Wales this autumn. Been a star this season to date.

Nick Williams played well for Cardiff Blues but the choice is James Benjamin of the Dragons who was everywhere on Friday night, a real top performance from the back row man.

Selection for the 7 shirt goes to Will Boyde of the Scarlets, won turnover ball, carried well and always a willing supporter for the ball carrier. Not a regular for the Scarlets when everyone is fit but is a fine player and when called on never lets the team down.

So there you have it our team of the week. As always, please listen to The Attacking Scrum podcast who will discuss the selection amongst all other aspects of Welsh Rugby from the week.